I had hoped to have this little post up in time for my anniversary.  August 25th marked ten years that I have been going to the border to “do work.”.  As usual the business of every day life got the best of me and I’m a couple of days late.

I recently returned from the Jade Helm “insurgent pocket.”  The borderlands of  sunny southern Califailure.

I had wondered if there would be any show of military might in this area so brightly highlighted in red on the map. I rolled through Campo to the end of Forrest Gate where it dead ends into the border fence as I had countless times before and saw no sign of anyone at first. 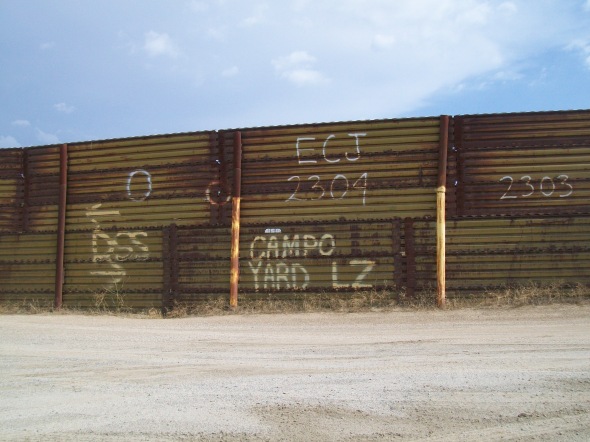 At this point one can go east or west.  East is Campo BP station’s territory and west is El Cajon’s.  I turned to the west.  Below Patriot Point I encountered a BP K9 agent and chatted with him briefly.  Nothing out of the ordinary.  He asked me what I was doing and I replied that I was just rolling the road for old times sake as I had done for ten years.  I told him I would probably only go as far as Zuellner’s High Point and maybe just sit a spell and take in the scenery.  We waved me on and I continued to the step grade at the Couch Trail that drops off down to the first “tank trap.”  There I stopped on the crest of the hill and binoed the area where I had startled two would-be trespassers only a few weeks before.

All at once I was surprised by lights and sirens and the sliding sounds of slamming brakes in the gravely dirt border road behind me.  Two BP vehicles were right on my bumper.  I waved and rolled down to the bottom of the hill, then put both my hands in plain sight on the steering wheel as they exited their vehicle. One agent  came up to the driver’s side while two other agents walked up to my passenger side.  Then the K9 agent rolled up as well.

They took my driver’s license, insurance, asked about my weapons, my gear, why I was there, what I was doing, etc. One agent asked me repeatedly if I was military.  I told them they must all be new in these parts because the old-timers all know me and my vehicle.  Then the K9 agent, still in his truck with his dog, informed me that my license plate was coming back as a different vehicle.

I don’t know if he was trying to get a rise out of me but I remained calm, if not a little amused at the whole incident.  I asked him what plate he ran and then politely corrected him. He had left off a letter, or at least pretended to and when I corrected him it came back clean.  I told him things must be mighty slow on the El Cajon side of things and it was then they informed me they were all Campo agents! They had crossed the imaginary line in pursuit of me and again I said things must be mighty slow, but I appreciated them doing their job so efficiently.  I said I would be disappointed if they had seen what they thought was a suspicious vehicle and not stopped it.

I added, “I hope there are no illegals coming across right now while you are focused on me.” (Surely that was not their intent..)

I been flagged down and briefly questioned many times in all my many excursions to the border but never had three trucks, four agents and a dog stop me with lights and sirens and full check of papers.  Had I been Jade Helmed?

Then an even more amusing though crossed my mind.

Perhaps the Agents thought they were being tested and I was part of Jade Helm. Who Jade Helmed who?

No matter.  I rolled to Zuellners High Point and back and as I was heading out I met the K9 agent again.  He was back at Patriot Point and I asked him what his Dog’s name was then asked him if he had ever seen the rabies tag on the fence post up there.  He had not.

I showed him Hot Shot‘s old dog tag and we swapped stories about our faithful K9 companions.  Then I was on my way.

But I’ll be back. To the Insurgent Pocket…

For all the border news in one spot please visit the http://charlieuno.com