The reason is that human and drug smugglers are attempting to evade the Border Patrol checkpoint on US-281 south of Falfurrias by traversing through the  surrounding private property.   As usual, area residents and ranchers become the daily victims of the Federal Government’s failure to secure the border. 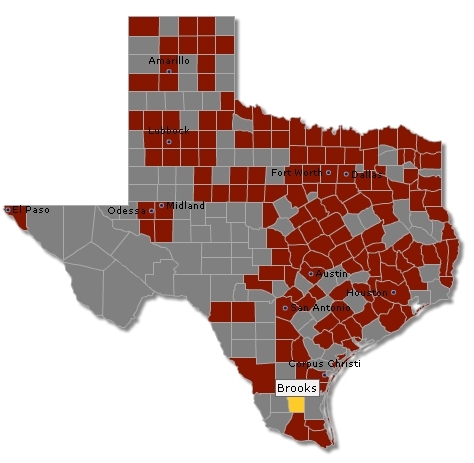 Note:  http://www.secureborderintel.org/ has been on the ground since July 19th monitoring USBP radio traffic that is broadcast “in-the-clear” (un-encrypted) from the busy McAllen Border Patrol Sector. It is estimated that un-encrypted radio traffic comprises less than 30% of the total activity for any given time period so our reports are extremely conservative from actuality.

Some (but not all)  of the monitored radio transmissions include GPS coordinates  which we have plotted on the enclosed map/link to give you a “thousand foot view” of the smuggling corridors in the Rio Grande Valley. This view is an “eye opener” and  corroborates the pleas for help by area residents and ranchers who have to deal with this daily criminal onslaught of illegal aliens and drug smugglers.

Legend:
– Red flags are confirmed drug incidents.
– Yellow flags are human smuggling and any incident that could not be confirmed as �6′ (drug smuggling)
–  The red diamond on US-281 (just south of Barrosa) marks the location of the Border Patrol Checkpoint
– Note: Human and Drug smugglers attempting to evade the US-281 checkpoint is the reason why   Books County is experiencing the high volume of smuggling traffic in the surrounding ranch lands.

The ranchers feel different groups along the border are sending mixed messages about the reality of the border crisis.

Recent remarks by McAllen Chamber of Commerce officials forced a group in Brooks County to draft a letter asking for the truth to be told about illegal immigration.

“This is not too much land, comparatively speaking with other ranches. King Ranch, Armstrong Ranch, Cage Rranch, Jones Ranch. A lot of those ranches are a heck of a lot bigger,” ranch manager Lavoyger Durham said.

Durham has spent the past 24 years patrolling the ranch. He says he’s found half a dozen bodies. He said buzzards often let ranchers know that a body is nearby.

“That in itself shows how many people have been coming through,” said Susan Kibbe, executive director for the South Texas Property Rights Association.

A few weeks ago, the mayor of Laredo told the Texas political website Quorum Report that his city’s crime rate was down. McAllen’s Chamber of Commerce told the website that sending the National Guard to the Valley sends the wrong message to businesses looking to move to the region.

“We respect their input and opinion, but we have a different reality,” Kibbe said.

Kibbe said the reality is much different in Brooks County.

“We wanted to make sure they understood where we were coming from as well,” she said.

Kibbe says she wants lawmakers to hear a united voice that help is needed to fight illegal immigration throughout South Texas.

CHANNEL 5 NEWS reached out to the mayor of Laredo and the McAllen Chamber of Commerce to get a response, but they didn’t respond.

For all the border news in one spot please visit http://charlieuno.com