I left the C1 compound about 0930 and arrived at the Golden Acorn Casino at 1215.  After topping off my tank I proceeded to the corned of the parking lot where a growing number of RVs were setting up.  The Golden Acorn had graciously provided the space for the organizers and participants of the 3rd Annual Robert Rosas Memorial Off Road Ride to dry camp before, during and following the event.  I went to the center of the encampment, knocked on a few RV doors and found no one home.  The weather was nice and I suspected the off roaders were out marking the course.

I pressed on the Forrest Gate in Campo and headed down to the southern end. Just before Forrest Gate dead ends into the border road several civilian border watch organizations and concerned citizens had planted a pine tree in memory of Agent Rosas.  Now, about a year later the tree was flourishing, just barely poking above the high weeds.  About 1300 I met up with Jim Betz, a member of the Border Patrol Auxiliary and Jeff Schwilk,  founder of the San Diego Minutemen, along with several other patriotic Americans, including “CampoGuy” and “36”, we proceeded to clear away the weeds and prepare the spot where a new memorial plaque would be installed next to the Rosas Memorial Tree. 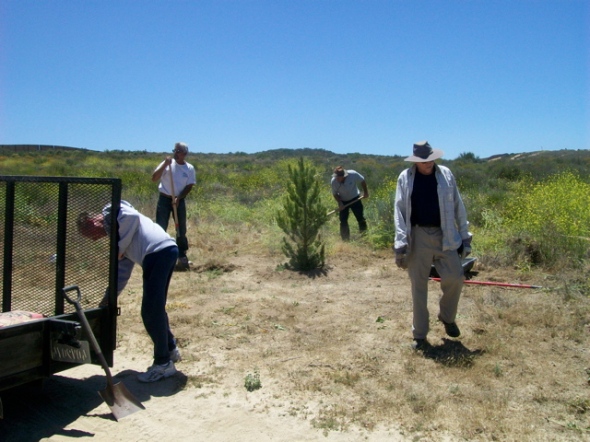 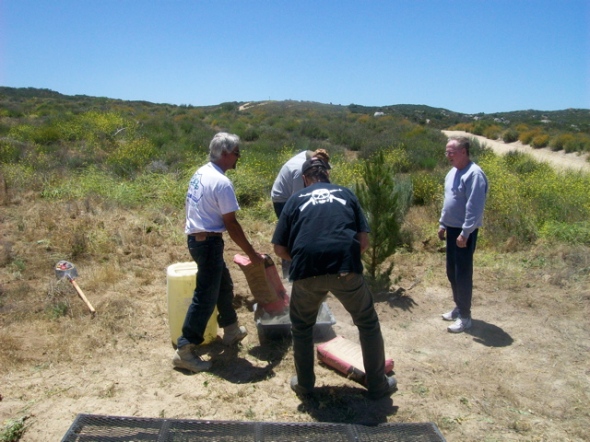 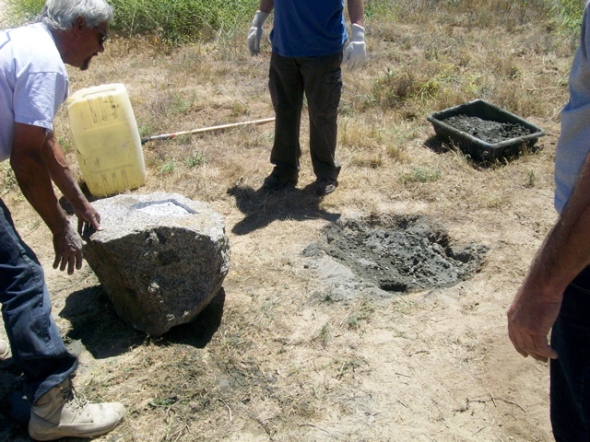 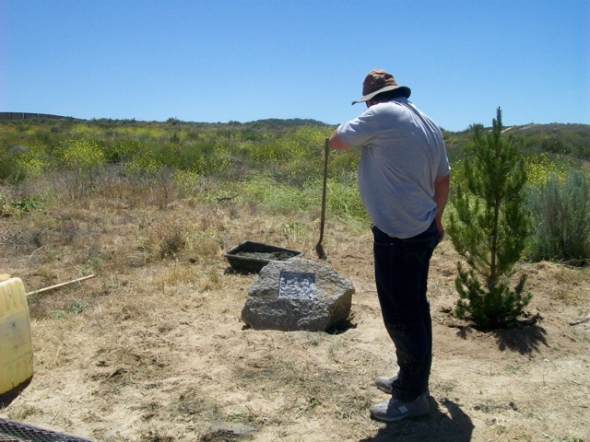 Some familiar with the tragic murder of Agent Rosas just east of Shockey Truck Trail might wonder why a tree and a memorial plaque might be located at the southern most end of Forrest Gate road, below the southern terminus of the PCT.  Well, that road has been used for many years by many concerned citizens, Minutemen and independent operators, as the entry point to the border and the rendezvous spot for many civilian border operations.  Indeed it was where I began my first op in the Campo area in April of 2006.

So the placement is a good one and will afford the average citizen who might not have the equipment or ability to travel to the actual scene of the murder the opportunity to stop and honor this great American hero.

After helping with the installation of the monument I headed to Camp Vigilance but took a little detour along the way.  Being Memorial day weekend I felt it appropriate to stop by the Campo Indian Reservation cemetery to pay my respects at the grave of John Finn. 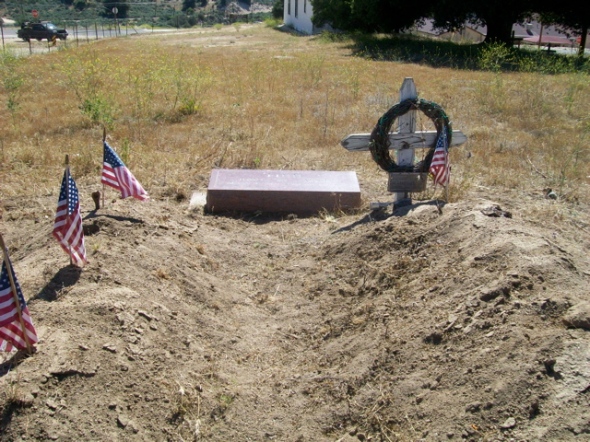 Several years ago at the time my friend 36 introduced me to Mr. Finn he was the oldest living Medal of Honor recipient.  What an honor it was to visit with and get to know this Great American in the last years of his storied life. 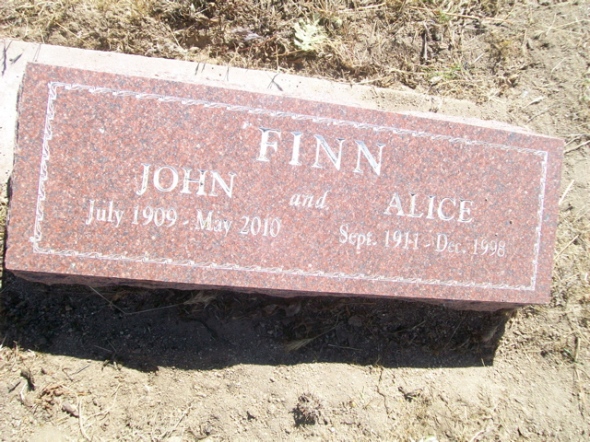 At Camp V I unloaded my bike and gear and set up my tent.  This was the first time in years that I was not able to sleep in the back of Godzilla, having sold it to Desert Dog of Yuma and month or two ago.  I definitely missed the old war wagon on Saturday night but more on that later.

Saturday 28MAY11: The Birthday of the United States Border Patrol and the day of the 3rd Annual Robert Rosas Memorial Off Road Fundraising Ride. 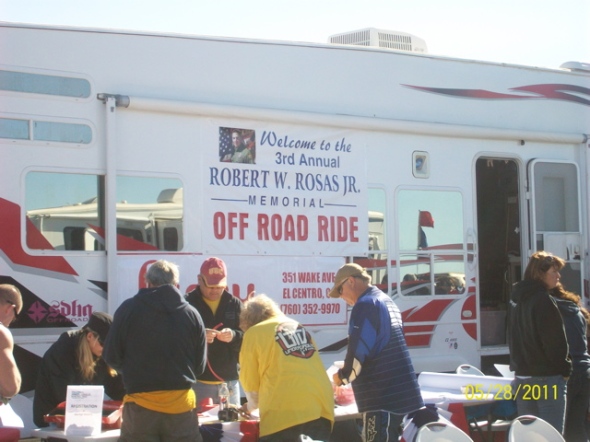 Signed in, paid the entry fees and took listened to Ronnie Golden do the pre ride meeting.  Hats off to Ronnie, his wife and all the Off Roaders who made this event possible for the 3rd year running.  They did a helluva a job.

After traversing a series of BIA “roads” and part of Shockey Truck Trail we arrived at our first stop: The cross erected at the site of Agent Robert Rosas execution.  Along with the many off roaders and concerned citizens a number of reptiles were out enjoying the picture perfect weather. 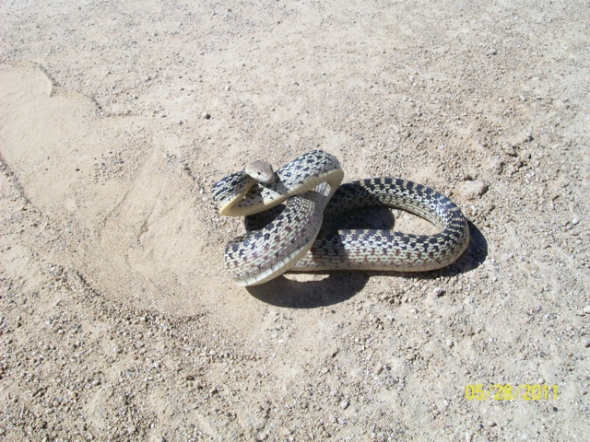 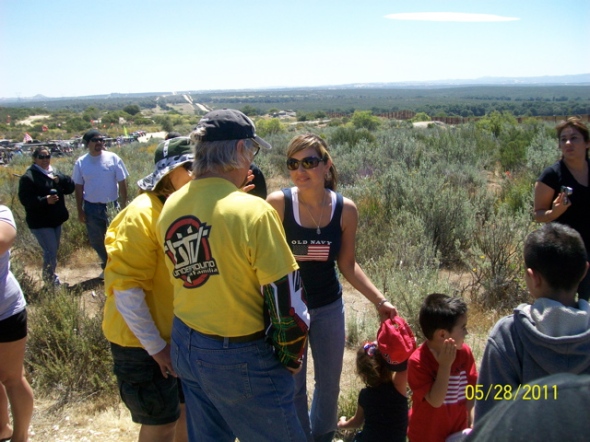 After an emotional ceremony at the cross, with Agent Rosas’ widow and two young children present, the off roaders set off through Smith and La Gloria canyons. 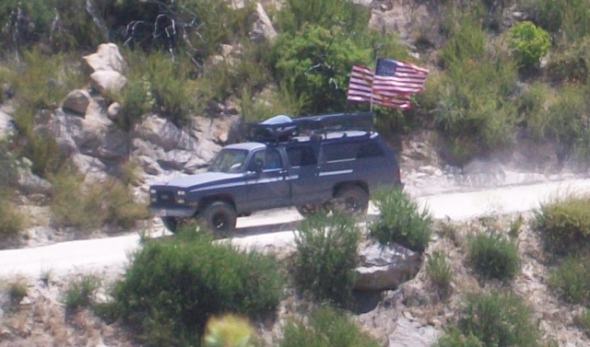 The second stop: The memorial tree and new plaque at Forrest Gate road. 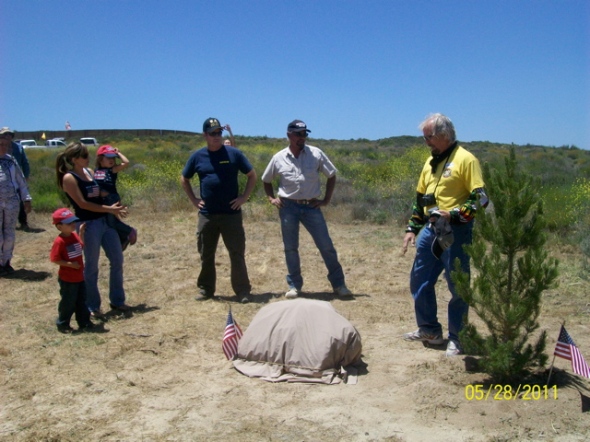 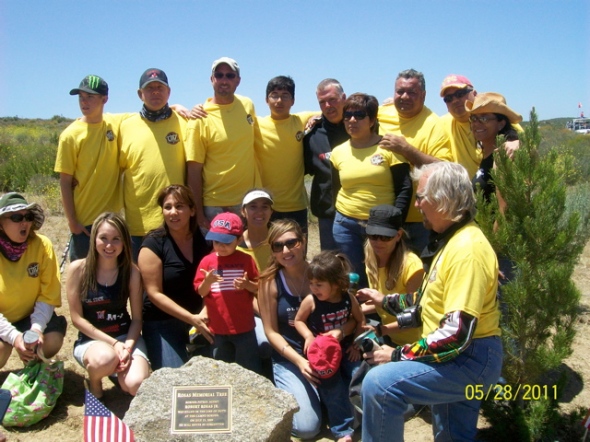 Again, after another emotional ceremony commemorating the life of an American hero who gave his life defending our porous southern frontier, the riders set off for the final stop: the Tecate tunnel. 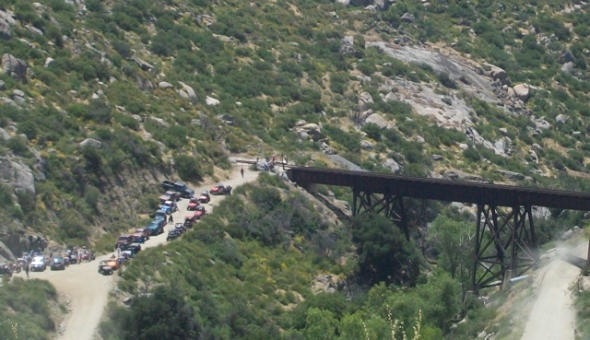 I ventured into the giant hole in the border to look around.  Found some fresh sign but on to the Mexican side found something a bit more curious. 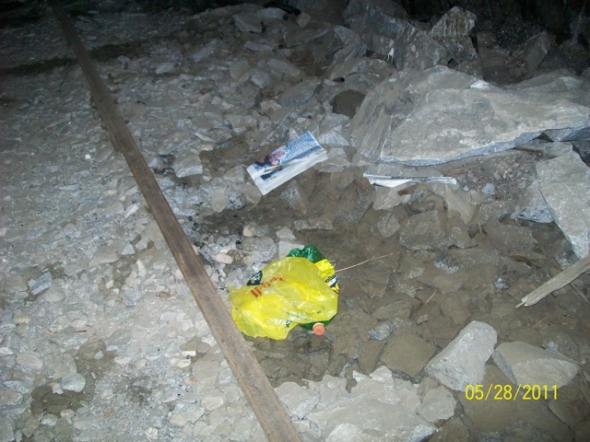 Years ago I had carved C1 in the timbers there.  At frst I could not find it.  Then, looking closer I found that someone had modified my C into a 6 and carved a 3 in front of it.

I laughed and called my old friend and veteran border watcher 36 to ask him just WTF??  He denied obliterating my moniker altering it to his own………but I have my doubts. 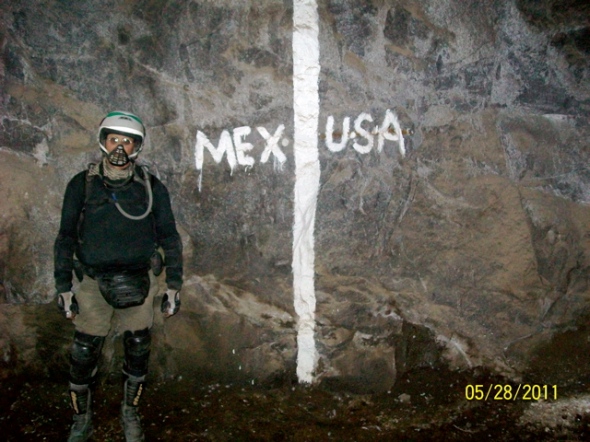 Rather than double back with the rest of the riders and head back to the casino I opted to press on west to Tecate.  I had previously stopped at the 121 hilltop and observed a Tecate PD stopped on the Pemex road.

So  I thought I might stop at a favorite spot west of Bell where we have viewed activity in the past.  However, I was beat to the punch as two of our brave men in green were already there and were actively observing some sort of activity. 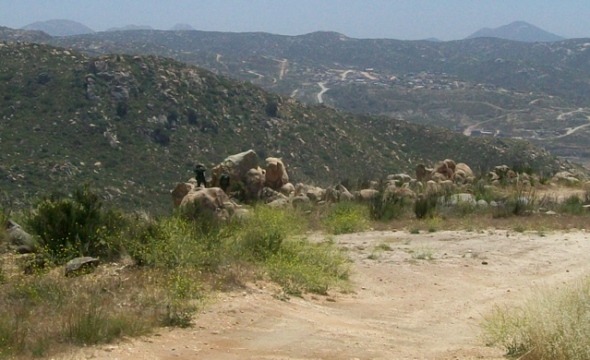 Rather than get in the way I decided to head to the 14 Horseshoe area.  I found no sign at all and so headed west.  I was joined by my old friend and veteran border watcher, Shorty. We leapfrogged to the hilltop overlooking the Tecate POE,

visited with the agents on hand then doubled back to Bell Valley where we sat in the shade, relaxed and reminisced.

I left Shorty there and then headed back east, taking the border road all the way to Red Shank in Tierra Del Sol Stopping only to observe a rattler crossing the road on the west side of Smith. 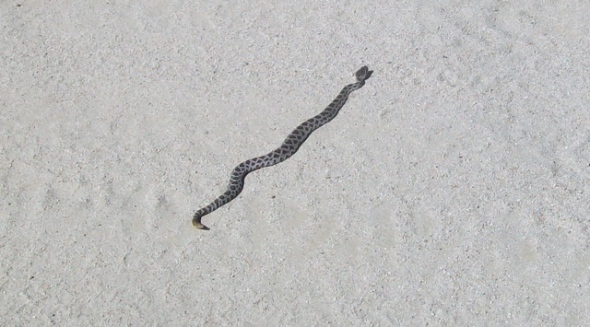 Then it was on to the casino for the drawing. 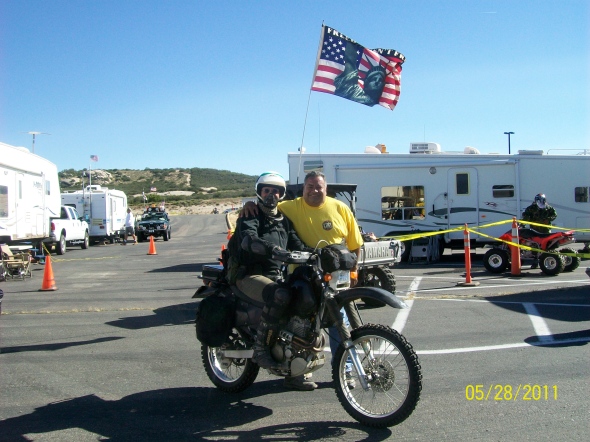 I got a free taco.

I guess you had to be there…….

It was a great day, a great ride and many great Americans took part in raising over $2000.00 for the Rosas family.  Again, many thanks to Mr. And Mrs. Golden and all the UTV members for organizing this event.  I look forward to doing it again next year.

Back at camp I loaded my back back on the Uno Mobile and devoured a hot bag of Mountain House Chili Mac while enjoying some wild turkey.

The wind had kicked up and I turned in early.  By 2100 I was sound asleep.

The wind blew hard all night and it grew ever colder.  I was glad I had the foresight to put on some long johns prior to climbing into my sleeping back.  Still it was cold and the high winds buffeted my tent. I was starting to miss Godzilla.  About 0300 I awakened to what sounded like someone throwing handfuls of gravel at my tent.  It was rain. Not steady but hard intermittent spurts.  Between the downpours I pulled up stakes, broke camp and packed up the truck.  I bugged out at 0430, leaving through cold wind rain and fog.  How you can have high wind and fog I’ll never know but we did. By 0800 I was back at the Uno compound having taking my time heading home.

I look forward to next year’s ride.  I made the first one, missed the second and had a blast this time around, all for a good cause.

Anyone familiar with this blog has no doubt noted that my posts have been few and far between. I regret that this will likely continue to be the case.  While I still go on missions they have changed and become more dangerous.  Writing up to date, accurate AARs is no longer prudent.  The enemy has pulled out all stops and the threat is too great.  It is no longer safe to include details as I have in the past.

The enemy within our borders is also taking his toll.  After many years in a field somewhat related to the endeavors chronicled on these pages I have been laid off.  I never could really afford to do the “volunteer work” I have done since my first mission in Tierra Del Sol in August of 2005 but I did it anyway, as did many of my brethren. Now, with my financial future uncertain I must curtail my border excursions for the time being.

Hope and Change?  WAKE UP AMERICA!!

I will continue to keep this blog up for as long as possible, as a tribute to the brave men and women, both uniformed and civilian, who regularly patrol our borders.

I may not be physically with them for a short while but I will be with you in the fellowship of the Spirit of America.

Rest assured that someday in the not so distant future