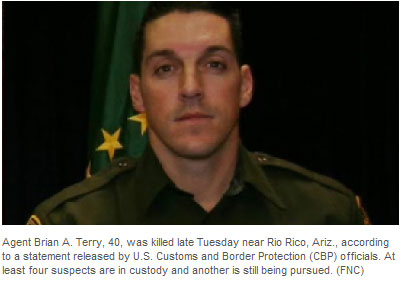 Border Patrol agent from the agency’s swat team was shot and killed Tuesday night in a gunbattle with suspected bandits south of Tucson.

Agent Brian A. Terry, 40, was killed when he and fellow agents exchanged fire with a group of five people about 11 p.m. in a remote area west of Rio Rico, said FBI spokeswoman Brenda Nath.

Four of the five suspected bandits were in custody Wednesday morning, including one man who was hospitalized with gunshot wounds, said agent Brandon Judd, president of the agents’ union in Arizona, Local 2544. The severity of his injuries is unknown.

Border Patrol agents and other law enforcers are searching for the fifth suspect in the area of the shooting, Nath said.

Terry was shot by bandits, Judd said. Bandits are criminals who try to rip-off loads of drugs and people from smugglers.

Terry and his fellow agents from the Bortac team were in the area where the shooting occurred because of the high levels of illegal activity involving armed border bandits.

“It wasn’t a surprise encounter,” Judd said. “They knew what they were going into.”

Bandits are the lowest of the low among criminals operating along the border, despised even by the drug- and people-smuggling organizations, Judd said.

“This is the biggest scum that you are going to run up against,” Judd said.

The remote area where the shooting occurred is an area frequently used by drug traffickers and people-smugglers.

“All these canyons in Santa Cruz County are notorious for smuggling humans and drugs,” Estrada said. “Obviously, it is a very dangerous situation for anyone patrolling those remote areas, particularly for Border Patrol. There is always that threat.”

Santa Cruz Sheriff’s Department was only serving in a support role, Estrada said. The FBI is handling the investigation.

“Our thoughts and prayers are with the Terry family for their tragic loss,” CBP Commissioner Alan Bersin said in a news release. “Our commitment to Agent Terry and his family is that we will do everything possible to bring to justice those responsible for this despicable act.”

Terry wasn’t married. He is survived by parents and siblings, Judd said. He called Michigan home and his parents live there. He was a police officer for nine years in Detroit before joining the Border Patrol just over three years ago, Judd said.

Terry was a great guy and well liked by colleagues, said Judd, who worked with Terry in Naco. He was a big, muscular guy who stood about 6-foot-4. He was ideal for Bortac, one of the Border Patrol’s elite crews.

“He was, by all accounts, an absolutely outstanding agent,” Judd said. “He was everything you would want on this team.”

The shooting elicited mixed feelings for Judd, who is president of the agents’ union in Arizona.

“You are very saddened when you hear something like this, especially when you know the individual,” Judd said. “You are also upset that the activity is such that it continues to present a very dangerous situation for our agents.”

There was no more information immediately available Wednesday morning about the shooting.

Agent Terry was a U.S. Marine Corps veteran and had served with the United States Border Patrol for 3.5 years. He is survived by his parents, brother, and two sisters.

Check back with AzStarnet.com for updates.

The last Border Patrol agent killed on duty in the Tucson Sector was Michael V. Gallagher, 32, who was killed in September in a wreck patrolling on the Tohono O’odham Nation.

Prior to that, Agent David Webb died in a rollover crash west of Tucson in November 2006.

With Tuesday’s death, at least 10 agents have been killed in the line of duty in the Tucson Sector of the U.S. Border Patrol. Previous deaths:

This entry was posted on December 15, 2010 by C1. It was filed under Uncategorized .