Bend Over, Here It Comes Again

This is for the benefit of those who might not be as up to date as my closer cohorts.  For a lot of you I know I'm "preachin' to the choir" and this is old news, but………….
Remember that leaked document regarding ways the despotic Obama regime could implement amnesty for ILLEGAL aliens without a vote?
http://www2.nationalreview.com/memo_UCIS_072910.html

Well, it didn't take long for them to implement these policies:

It's happening and what are YOU going to do about it?

Meanwhile this corrupt administration attempts to obstruct and even prosecute heros charged with protecting and defending you and your families:

Next door to Sheriff Joe's Maricopa county, Sheriff Babeu of Pinal  has this to say: 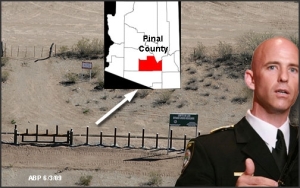 Sheriff Babeu says its an outrage that the Obmam administration stopped building the fence
EXCLUSIVE: Sheriff Babeu: It’s ‘An Outrage’ Obama Stopped Building Border Fence
Thursday, August 26, 2010
By Terence P. Jeffrey, Editor-in-Chief
(CNSNews.com) – Sheriff Paul Babeu of Pinal County, Ariz., says it is “an outrage” the Obama administration has stopped building the double-fencing needed to assist the Border Patrol in securing the U.S.-Mexico border and says it is time for the United States to begin fighting illegal immigration and drug smuggling directly at the border instead of within the country where it harms American citizens and communities.

By the time Obama was inaugurated in January 2009, according to the Justice Department, only 108 miles of the 262-mile-long Arizona portion of the 2,000-mile-long U.S.-Mexico border had been fenced.

“We shouldn’t be fighting this battle in the interior. We should be fighting it directly on our international border,” Babeu said in an "Online With Terry Jeffrey" interview. “And it’s an outrage that our own federal government stopped building the fence.”

Babeu, whose southern Arizona county sits astride major drug-and-alien-smuggling routes running north from Mexico, has joined with Sheriff Larry Dever of Cochise County, Ariz., and Arizona’s two U.S. senators, John McCain and Jon Kyl, to push a 10-point plan for securing the border. The plan includes, among other provisions, completing the necessary border fencing, deploying 3,000 National Guard troops to cover just the Arizona stretch of the border, and deploying significantly more surveillance aircraft than are currently used to patrol the border.

Babeu, who is also a major in the Army National Guard and who did a tour in Iraq, formerly commanded Task Force Yuma, a deployment of 700 Army and Air Force National Guard troops who worked with the Border Patrol to secure one segment of the U.S.-Mexico border in Arizona.

CNSNews.com asked Babeu about a 2009 report from the National Drug Intelligence Center, an element of the Obama Justice Department, that described the Arizona border as “underprotected,” “especially conducive to large-scale drug smuggling,” and a place where “few barriers exist … to impede drug traffickers, chiefly Mexican DTOs [Drug Trafficking Organizations], from smuggling illigicit drug shipments into the United States from Mexico.”

“That sounds pretty accurate to me,” Babeu said. “I just wish that the top leaders would read it and take heed, because it doesn’t match up not only with their policy, it doesn’t match up with, in fact, their actions and enforcement policies. Because we live here, we understand this better than anybody. And this in fact is going on.”

Babeu said he is confident that the border can be secured, but argued the Obama administration’s decisions not to build the border fence and to follow a catch-and-release policy with illegal aliens have been counter-productive. Recent steps the administration has taken regarding the border, including the deployment of 520 National Guard troops in Arizona, Babeu indicated, were insufficient and amounted to ineffective pre-election posturing.

“Build the double-barrier fence and complete it,” said Babeu. “I’m a combat engineer in the Army, that’s part of my job. I have had 20 years now. I don’t speak for the Army, but I was down in Yuma. I was a tactical commander for 400 to 700 active duty soldiers and airmen, and we secured that border, supporting our heroes in the Border Patrol. Ninety-five percent reduction in illegal entries. And to this date, there’s not one soldier there, and why is that? It’s because we completed the double-barrier fence and they have full enforcement. No more catch-and-release. But catch-and-release is alive and well throughout the rest of the state. And the fence isn’t built. Obama stopped the construction. So it’s all this political talk. They’re deploying only 520 soldiers to Arizona when we need 3,000 armed soldiers. And they’re deploying right before the November election. So you don’t have to be a detective to figure this one out.’

President George W. Bush signed the “Secure Fence Act” in October 26, 2006. This law specifically directed that “the Secretary of Homeland Security shall provide for least 2 layers of reinforced fencing, the installation of additional physical barriers, roads, lighting, cameras, and sensors” along 700 miles of the 2000-mile-long U.S.-Mexico border.

As of this April, according to the Government Accountability Office, the government had only constructed 347 miles of what it calls “pedestrian fencing.” This fencing, most of which is single-layered, “is designed to prevent people on foot from crossing the border,” according to the GAO. Currently, the administration plans to build a total of 367 miles of such pedestrian fencing.

Additionally, as of April, the government had built 299 miles of what it calls “vehicle fencing” along the border. This fencing, according to the GAO, “consists of physical barriers meant to stop the entry of vehicles.” It often is made of steel beams embedded in ground. This type of fencing is not intended to stop pedestrians.

“As of April 2010,” the GAO reported, “CBP [Customs and Border Protection] had completed 646 of the 652 miles of fencing it committed to deploy along the southwest border. CBP plans to have the remaining 6 miles of this baseline completed by December 2010, pending resolution of litigation for portions of property along the border. Also, CBP plans to construct an additional 14 miles of pedestrian fencing in the Rio Grande Valley Sector by September 2010.” The 652 miles of total fencing now slated to be built, includes only 367 miles of "pedestrian fencing."

The 700 miles of double-layered reinforced fencing with roads and lighting that was envisioned by the Secure Fence Act has not been built.
Terence P. Jeffrey, Editor-in-Chief

WAKE UP AMERICA OR YOU SOON WON"T HAVE AN AMERICA TO WAKE UP TO!