This was sent from a charlieuno.com reader in London, England. The picture directly below was taken at 9:30 on June 29, 2010 in front of the U.S. Embassy in London. These people are standing in line, patiently waiting to obtain the necessary papers to enter the U. S. legally. 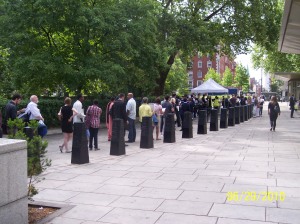 
Below  is a photo I took a while back of a not so patient group of individuals illegally entering the United States.


Which group do you suppose this President wants to reward?
WAKE UP AMERICA!
C1 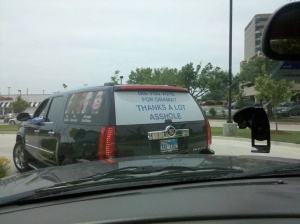 WASHINGTON (AFP) – The US government on Tuesday filed a lawsuit against Arizona for a controversial immigration law which has been sharply criticized by America's neighbors and by the US administration.

A Justice Department statement said it was challenging the new state law in the courts because it hampered the authority of the administration of President Barack Obama to enforce national immigration policy.

Federal laws do not permit the development of a "patchwork of state and local immigration policies," it said.

The Arizona law, due to take effect on July 29, makes it a crime to be in the state, which borders Mexico, without proper immigration papers and requires local police, who are not federal agents responsible for immigration matters, to determine if people are in the country legally.

US officials said they took the action after consulting with various law enforcement departments, chiefs of police, civil rights groups and other local officials.

Many said they were concerned the law would make victims of crimes or witnesses "less likely to contact or cooperate with law enforcement" if they did not possess proper legal papers.

Officials in Arizona argue they have been overrun by illegal immigrants leading to a spike in the crime rate and straining state resources. They say the measure was necessary only because of lax federal government enforcement of the southern US border.

"Arizonans are understandably frustrated with illegal immigration, and the federal government has a responsibility to comprehensively address those concerns," Holder said.

However, he added, "diverting federal resources away from dangerous aliens such as terrorism suspects and aliens with criminal records will impact the entire country's safety."

"The American people must wonder whether the Obama administration is really committed to securing the border when it sues a state that is simply trying to protect its people by enforcing immigration law," Republicans John McCain and Jon Kyl said in a joint statement.

More than 60 percent of the US population supports Arizona's new immigration law, according to a recent opinion survey.

About 30 percent of Arizona's population of 6.6 million are Hispanic, one third of whom are foreign born, including 460,000 illegal immigrants.

Department of Homeland Security Secretary Janet Napolitano said in the statement that her staff was "actively working with members of Congress from both parties to comprehensively reform our immigration system at the federal level because this challenge cannot be solved by a patchwork of inconsistent state laws, of which (Arizona's) is one."

Obama on July 1 renewed his called for Republicans to back immigration reform to bring 11 million illegal immigrants out of the shadows, but his political foes quickly accused him of "political pandering" four months ahead of key legislative elections.