I departed the C1 compound at 0655 Saturday, November 8th for a bit of a different kind of weekend mission.  Actually it consisted of lots of stops and tasks and therefore Hot Shot remained at the home 20.  At 0810 I stopped in Temecula to stretch my legs and by 0910 I was at GI Joe’s Army-Navy surplus in El Cajon.  In the weeks prior Red Army had informed me that GI Joe’s had some good used body armor for sale cheap.  This info was accurate. I purchased a decent class IIIA vest that still has a year left on the warranty.  I wasn’t as lucky as Red Army, however, as he had managed to find a unit that still had a trauma plate in it.  I rifled the entire pile but all the trauma plate equipped vests are gone.  Still, for a good class IIIA vest, $75.00 is a bargain.  I also picked up a few pieces of winter clothing.
As I left down El Cajon Boulevard I spied hundreds of bikes and a Border Patrol H2 in front of the Harley shop.  It dawned on me that this was probably the staging area for the annual Border Patrol bike run for the children of fallen agents.  Horsepuckies had mentioned to me that he had been asked by a high-ranking Border Patrol official if he would deal cards for the poker run at the bikers third stop: Pine Valley Java.
I had no trouble finding the place and was greeted by Horsepuckies and Freckles.

Horsepuckies and Freckles waitin’ for the BP bikers


We sat and visited for and hour or so before bikes started to trickle in.

Bikers start to trickle in for the BP poker run

These boys are trying to recruit Horsepuckies

They invited us to join the Ugly Mother______s


Eventually the roaring hoard descended upon us en masse and, luckily, Horsepuckies had the foresight to bring two decks of cards. 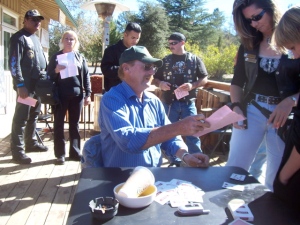 Startin’ to get busy


To keep things flowing smoothly I helped out by setting up a second table to deal the cards.  Two dealers, no waiting.

Gettin’ busy-Time for a second dealer

A lull in the action


By 1300 the last of the bikers were on their way and so were Horsepuckies, Freckles and I.  Horsepuckies headed home and I headed for the border at Campo.  Mad Max was at the 139 and, true to his moniker, was angry as usual.  He bitched about me and Dog purchasing Godzilla from him, a decision he made without coercion, and then he invited me to leave.  Not in the mood to argue or be subjected to his incessant bitching, it was an invitation I readily took him up on. God Bless ya, Max.
In the spirit of the Association of Dedicated Independent ObserverS (ADIOS), I headed to Camp Vigilance to visit with the agents of the Border Patrol Auxiliary (BPAUX).  One of their men had recently completed the Yuma Border Patrol Citizens Academy and I was anxious to hear about it first hand.  I also inquired about, and obtained permission to relocate mi casa de la frontera to the Camp.  As I was preparing to leave I obtained details of the mission they were about to set off on that night.  It was a mission which I later found out resulted in the reporting of 14 illegals to the Border Patrol, 5 of which were dressed in the black “pajamas” and large back packs typical of drug runners. In addition, one of the BPAUX agents was responsible for single-handedly apprehending a lone insurgent who wandered haplessly into their remote base camp.  Good Job BPAUX!  These are a highly organized group of observers and I look forward to deploying with them for a mission or two sometime in the future. I departed Camp Vigilance at 1520 and headed to the Horsepuckies spread.


After visiting with Horsepuckies and riding along with him as he fed the horses and cattle, 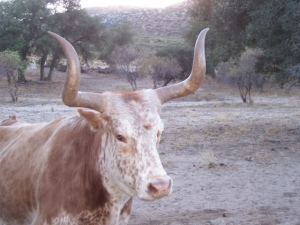 
I headed back to the border.  My first job was to check on the new flag that Ronbo and 36 had placed at Patriot Point.  It was 1700 and already dark but I shined my GoLight up the pole to find Old Glory fluttering in the breeze.


Then I patrolled to the west on the G road and setup watch at the Donut Hole at 1740.  There was good moonlight and night vision was functioning well. 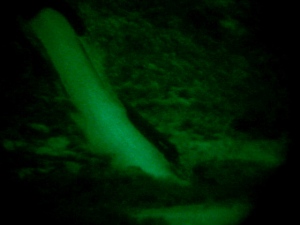 The tank trap from the donut hole with night vision


There were also quite a few BP agents in the area, including two on ATVs.  I called my old buddy 36 and chatted with him for a while.
There was a lot of activity at the Ranchita, including a motorcycle that rode back and forth between the ranchit a road and the new house continuosly for an hour or so.  Also, in the area between the Pemex road and the tank trap, there were lights and at least two trucks moving in and out of the area.  About 1930 the motorcycle I had been watching left the Ranchita area and headed east down the Pemex to the area were the lights and trucks were staging.  My eyes grew heavy, sad to say I began to doze off, and I came to about 2130 to find several BP agents in the area by the tank trap on foot and in vehicles.  Undoubtedly while I nodded some illegals had made their move to the east of my position.  I left the area at 2200 and by 2230 I was back at Horsepuckie’s.  I pulled up to the 5th wheel and was startled by the former Marine gunner as he exited the trailer where I planned on sleeping.  He informed me that he had run electricity to the 5th wheel for me and had the lights and heater going! God Bless him.  I slept like a baby.
Sunday 9NOV08
I awakened at 0500 and called my parents back in Texas at 0600, as is my habit on Sunday mornings.  It was 43 degrees with wind and rain.  I sat in my truck drinking coffee, charging phones and chewing tobacco until Horsepuckies emerged and invited me into the house.  I sat in the covered porch area with this Vietnam vet and, in between stories of his service in Nam we planned the day’s activities.  Our mission was to remove the last two Mountain Minutemen vehicles, Raptor and Godzilla off of the border and away from vandals, foreign and domestic.

9NOV08 Preparing to relocate the Raptor and Godzilla


We decided to attempt to relocate Godzilla first. After dumping five gallons of gas in her tank and a liberal amount down the carb, Horspuckies coaxed her to start.  The brakes felt mushier than usual and when we checked the master cylinder we found the back reservoir to be bone dry.  Change of plans.  As we did not have any brake fluid with us we decided to move the Raptor first.
The windshieldless Jeep fired right up and Horsepuckies squeezed his lanky frame behind the wheel.  He drove it to the ranch with no problems, with me in his truck following close behind. At the ranch we picked up some brake fluid and headed back to the border.
I filled the back brake reservoir and pumped them up.  Then I started up Godzilla, only to find it would not shift into any gear, forward or reverse.  The tranny was completely devoid of fluid.  So it was back to Cameron Corners where we picked up five quarts of transmission fluid.  We got back to the beast and dumped four quarts into it.  It shifted into gear and I scooted in behind the wheel.


With Horsepuckies bringing up the rear, I managed to guide the unwieldy, unsafe and unregistered vehicle all the way down Highway 94 to Camp Vigilance.


It will remain there under the watchful eyes of the Camp’s caretakers who are now on site 24/7.  It is a monument to all the various Minuteman groups who have used it on the border, past and present.  Or to stupidity…….depending on how you look at it.  Thanks to all the individuals who have worked on Godzilla and got it back on the road for this relocation to safe haven.


I will be back I the area on Wednesday, 26NOV and will have to leave on Saturday the 29th.  I hope as many of you as possible can meet us there for missions into Hauser and/or Smith Canyons.  With Obama preparing to take the helm of our country the green light is on for illegals, who believe amnesty is inevitable.  Let’s band together and make it as difficult as possible for them to invade the United States of America.
God Bless Y’all.
Semper Vigilans,
C1

This entry was posted on November 13, 2008 by C1. It was filed under Uncategorized .