I received this info from a reliable, informed local border observer who wishes to remain anonymous.  It's lengthy but interesting and bears further investigation.  A mission there would definately involve considerable time, manpower and planning, but if the illegals can do it we should be able to do it too.
Many thanks to the source of this info. You are a true and dedicated Patriot!
Thank you for your service to our country.
C1 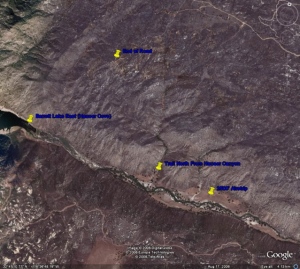 Hauser Canyon report #1
I saw on your Blog that you wanted to go work Hauser Canyon.  I use to hike that area as a kid.  We landed a plane there once and followed the stream in to Barrett to fish the Hauser Arm.  We scared a group of 9 out from under a tree when we flew over.  After we departed we got followed out by 3 air units and ramp checked and Gillespie Field.  I have seen huge groups there.  One time we hiked south into Hauser Canyon from what I think is called Sky Valley Truck Trail.  We passed head on with a group of 49 illegal aliens who were coming up the trail, broad day light, close enough to brush against several of them.  A few hours later 11 more walked right by us while we fished, both of us were camo'd and armed.  One member of the group spotted us as they passed, we both had our side arms out and ready, the lead guy noted that and tapped what I though was a flap holster on his hip, smiled and walked off with the group.  We reported this later to Federal Forestry Police who accused us of being smugglers and said they catch everyone who crosses through their area anyway… BS.  So, Hauser can be accessed by driving west into the mountains past the old Camp Morena military base and continuing mostly south and west towards Barrett.  You will eventually reach an area almost looking down south into Hauser Canyon where you can park.  I would suggest a trip to that location where you leave at least one guy with the vehicle (two vehicles is way smart in case of break down or other problems) if you are going to explore on foot.  And buy any of the permits they require to be there… more BS, but why get screwed with.  Scouting the trails around the area should show you where the recent activity is.  The big group we encountered was in mid February almost 15 years ago.  I'm sure little has changed around there.  In fact, I don't think I have ever been there without seeing groups.  I've ran this info by several interested people over the years but no one has followed up on it.  I don't work the area because I'm just too committed to securing the area around_________.  We worked a group there last night in fact.  I think you would do well at Hauser and probably get some good pics.  Check the firearms laws carefully.  Some of the Federal Forrest land requires that any firearms be unloaded, disassembled, and locked in a case.  Ours were when we talked to the Federal Forestry SWAT team guys (they were wearing woodland BDU's, tactical vests, and had M-16's).  They left us with the parting words that "Hauser Canyon is just too dangerous for you guys to be hiking around in".

Hauser Canyon Report #2
Here's a little more on Hauser Canyon and two ways I have accessed it.  I confirmed that the name of the road is "Skye Valley Road" leading from the west end of Lake Morena with a left turn on to an unnamed Cleavland National Forest road that ends in a loop near the main smuggling trail.  (see attached Google Earth map)  I highly recommend Google Earth and can help you get set up if you need it.  It's basically a fee download.  I didn't have this luxury years ago but would have saved me a lot of hiking.  It looks like you stay on Skye Vally for about 4.25 miles then turn left on the other road continuing for another 1.5 miles or so.  My guess is you will encounter the same unfriendly Forest Police we did.  But, telling them you are Minutemen might work best.  At least they won't think you are smuggling.  Pretending to be hunters/hikers/campers may just raise too much suspicion.  Besides, that is our land, we just pay them to police it.  As long as you guys are legal there they can't kick you off.  You might even go as far as to ask the Ranger about firearms laws in the area telling them you are there to observe and report illegal activity and wish to protect yourselves should the need arise.  The trail leading up from Hauser Canyon is steep!  It's only a couple miles but I remember it taking well over an hour to make it up.  Catching a group at the top of the trail would find them low on energy.  Placing an advanced scout a ways down the trail would give you early warning.  I attached an article with a little info from someone else who has ventured in on horseback.  I hope you guys actually go work this.  I took my very first illegal alien picture there more than 12 years ago, all you could see were 11 tiny figures in the distance, but it may be the only privately held evidence of the massive smuggling in that place.  Bring your camera.  Good luck.

Hauser Canyon Report #3
One reason Hauser is so busy is the fact there are few trails in that region that lead all the way through and still come out on the west side of the I-8 and Olde 80 check points.  Most of these groups likely load at Corte Madera near I-8 or continue into Pine Valley.  A couple years ago a group died of exposure in the Corte Madera area.  Other than a few off roaders there aren't many people in this area to detect and report them even if they are in trouble.  But the area has been busy for decades.  I know BP would appreciate the help there.